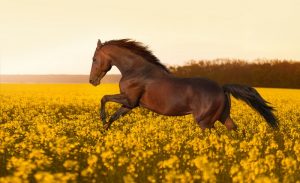 In 2014 the Food and Drug Administration (FDA center for veterinary medicine (CVM) approved two new drugs for the treatment of navicular syndrome in the horse. The drugs are OsPhos and Tildren and are Bisphosphonates (BP); a class of drug that was developed in the late 1960’s for various diseases of bone and calcium metabolism. Bisphosphonates regulate bone metabolism through bone resorption and other mechanisms. Currently there are several bisphosphonates available in the human and equine market and it is important to understand some key differences.

First, bone metabolism is a complex and intricate process. In a simple description there are two major cells in the bone metabolism process. The first is osteoclasts, which are continually roaming the bone surface and remove older or damaged bone. This occurs in a tightly coupled process with the second type of bone cell, the osteoblast. This bone cell travels along and lays down new strong healthy bone where osteoclasts had previously removed bone. This system is in balance with no net loss or gain of bone to the skeleton, and remains through out life and actually replaces the full skeleton several times in a lifetime. For example, the skeleton you have as a mature adult is not the same as when you were a teenager, all related to the coupled mechanism of osteoclast and osteoblast quietly and efficiently doing there tasks.

The first generation of BP, are non-nitrogenous and include etidronate , clodronate (OsPhos) and tiludronate (Tildren). These all act as inhibitor (slow down) of osteoclasts and thus as a regulator of bone metabolism. Each disrupts an energy pathway with adenosine triphosphate (ATP) and “withholds” the energy from the osteoclasts.

The second and third generation bisphosphonates include the more mainstream human bisphosphonates and include Aldronate, (Fosomax), Ibandronate (Boniva), Zoledronate (Reclast) and Risedronate (Actonl). These drugs do not utilize the ATP-ase energy depleting pathway rather they use the much more complex Geranylgeranyl and Farnesyl pathways.

Tildren and Osphos are approved by the FDA from data containing safety, efficacy and toxicity studies to validate their use as outlined on each package label. Each BP has its own physicochemical and biological characteristic. This variability makes it impossible to extrapolate data from one compound to another with each compound considered on its own with respect to use and toxicology.

Fleish, Herbert- Bisphosphonates in Bone Disease- From the Laboratory to the Patient. 4th editio, Academic Press 2000

Accessibility by WAH
Call Us Text Us