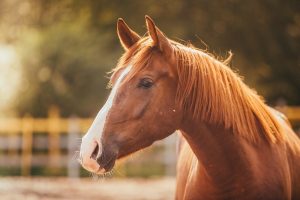 Craig Carter, DVM, PhD, director of the University of Kentucky Veterinary Diagnostic Laboratory and professor of epidemiology, College of Agriculture, Food and Environment, gave a talk on equine leptospirosis, “Now we have a vaccine!” at the 7th Annual Kentucky Breeders’ Short Course, held Jan. 30 in Lexington.

Leptospirosis is a zoonotic (transmitted between animals and humans) bacterial disease found worldwide that can affect any mammalian species, including humans, wildlife, rodents, livestock, and horses.

Some risk factors for horses contracting leptospirosis are increased rainfall, standing water or bodies of water in the environment, wildlife/domestic animals shedding the organism upon urination, contaminated soil, overcrowding of horses in pastures, and feeding off the ground.

Researchers conducted two national studies investigating the prevalence of leptospirosis, and the results ultimately led to the development of a vaccine. Carter and the UK VDL conducted the initial National Equine Leptospirosis Seroepidemiology Study from 2010-2012. The study consisted of 30 diagnostic labs in the United States and Ontario, Canada. Carter and his team looked at five geographic regions and evaluated serum from animals moving in the markets and to events. The team made an assumption that all horses in the study were healthy at the time of the study. The total population consisted of 1,495 horses, with 561 mares and 934 geldings.

The findings showed no differences in horses with leptospirosis by gender; advancing age was generally associated with seropositivity, meaning the horse had been exposed and could become fully infected; and there was no difference in overall seropositive among regions, although Thoroughbreds were less likely to be seropositive than Quarter Horses or Quarter Horse-type breeds. The study demonstrated a strong evidence of broad-based horse exposure to a variety of leptospiral variations across the United States and Ontario.

As with human cases, said Carter the disease is likely underreported for many reasons, including lack of clinical suspicion and lack of laboratory support. Diseases that occur commonly in an area carry a high clinical suspicion. If veterinarians have not diagnosed a disease routinely in an area, they are not as likely to suspect it as a possible cause. However, even if leptospirosis is suspected, many laboratories around the country do not test for it.

Vaccine manufacturer Zoetis conducted the second national study in 2012-2013. They studied 5,261 horses in 53 clinics across 18 states. Of those, 75% of the horses studied tested positive for leptospirosis. The data mirrored the UK VDL study. With that evidence, Zoetis then committed to produce a USDA-licensed leptospirosis vaccine for horses in 2013 and launched the vaccine in October 2015.

The vaccine, Lepto EQ Innovator, is the first and only USDA-licensed equine vaccine to help prevent leptospirosis. The vaccine is designed to help prevent leptospiremia caused by L. pomona, which could, but has not yet been demonstrated to, help reduce the potential risk of equine recurrent uveitis (ERU) infections, abortions, or acute renal failure caused by L. pomona. During the vaccine’s efficacy trial, none of the vaccinated horses showed any signs of leptospirosis infections. Ten horses in the control group (not vaccinated) developed a fever of at least 103 degrees Fahrenheit (a normal temperature is 99-101 degrees Fahrenheit). Upon post-trial testing, L. interrogans serovar Pomona was detected from all 15 controls but none of the vaccinated horses. In other words, LEPTO EQ INNOVATOR prevented leptospiremia, kidney colonization, and urinary shedding in this study. In the safety trial, only three of 681 (.004%) of horses experienced injection site reactions. By preventing infection by leptospiral organisms, the vaccine minimizes contamination of the environment, transmission to other horses, and the presence animals with a carrier state.

There have been no reactions in 99.8% of horses tested, the vaccine is safe for healthy, pregnant mares in their second trimester, and horses should be vaccinated prior to exposure. Lepto EQ Innovator is given in a single dose 1 mL intramuscular vaccine followed by a booster in three to four weeks. The manufacturer recommends annual revaccination for continued protection.

Carter said this is an excellent example of how a unit in UK’s College of Agriculture, Food and Environment can work in concert with the equine industry to help solve a major health problem in Kentucky and beyond.

Alexandra Harper, MBA is the Operations and Communications Coordinator for the UK Ag Equine Programs.

Accessibility by WAH
Call Us Text Us